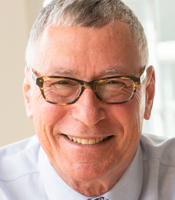 I currently serve as Deputy Scientific Director for the Ludwig Institute for Cancer Research. In this capacity I work closely with Ludwig’s President and its Scientific Director in the development and implementation of overall strategic and policy initiatives, and administration of the Institute’s research programs. Among my responsibilities are establishment and coordination of major interdisciplinary research initiatives, facilitating collaborations among Ludwig scientists in the Institute and Centers as well as with external partners; developing and nurturing partnerships with government agencies, research foundations, and philanthropic organizations, and serving as program director for major externally funded grants. I am also the Director of the Ludwig San Diego Branch.

It is a privilege to work with Ludwig scientists and colleagues throughout the world to facilitate opportunities to further develop world-class, multidisciplinary research initiatives focused on enhancing the basic understanding of cancers and improved outcomes for cancer patients, as well as on improving approaches for early detection and prevention of cancer.

Over many years my scientific activities have focused on interdisciplinary human genome research to improve the health of people worldwide through disease prevention and intervention. Previously I served as Deputy Director of the J. Craig Venter Institute (JCVI) as well as the two research institutes that formed the JCVI, The Center for Advancement of Genomics, where I was President, and The Institute for Genomic Research as Vice President for Research. Previously, I served at the US National Institutes of Health in several capacities, including Director of the Cancer Genomics Office at the National Cancer Institute, where I led the NCI’s Cancer Genome Anatomy Project and the NIH Mammalian Gene Collection, and Chief of the Sequencing Technology Branch at the National Center for Human Genome Research (now the NHGRI). Prior to joining the NIH, I was Senior Director of Research for a pioneering biotechnology company, Genex Corporation. I received a PhD in Developmental Biology from The Ohio State University and post-doctoral training at Southwestern Medical School, Dallas, Texas.