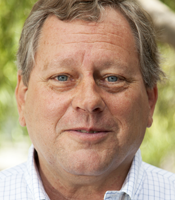 I became Director of Strategic Alliances in Central Nervous System (CNS) Cancers in 2015. In this role I lead Ludwig’s partnerships with the Global GBM Alliance and the Defeat GBM initiative of the National Brain Tumor Society. It is a privilege to work with scientists from around the world in addressing adult and pediatric brain cancers.

I first joined Ludwig in 1985 as a member and Ludwig Montreal branch director, where my research focused on defining the genetic lesions in human cancer, determining their physiological significance and using that information for therapeutic approaches. This continued with the transfer of the Branch to San Diego where I was founding branch director. Prior to joining Ludwig I did postdoctoral work at the Jackson Laboratory, MIT and the University of Utah, and held professorships at the University of Cincinnati and McGill University. I received my PhD with honors from the University of Kansas and a BSc in Microbiology from Kansas State University.