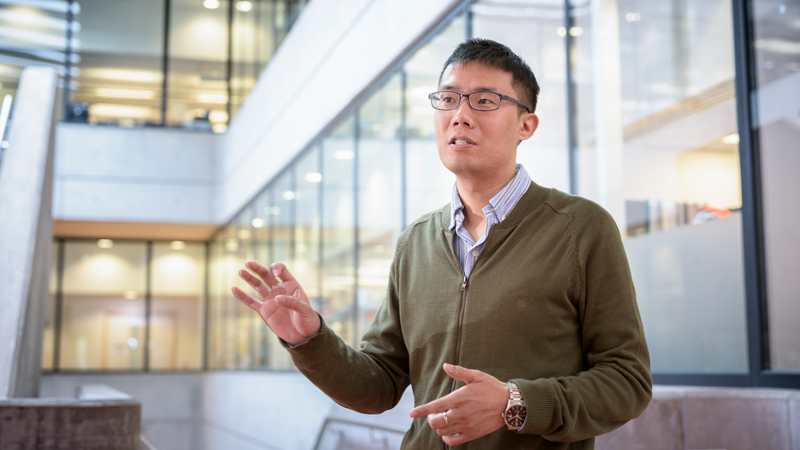 PhD in Chemistry, The University of Chicago, Illinois, USA, 2013

After training as a chemist, I became interested in epigenetics during my PhD in Chuan He’s lab at the University of Chicago. I then did postdoctoral study in Stephen Quake’s lab in at Stanford University, where I further developed the interest to use epigenetic information for clinical applications. I joined the Ludwig Institute for Cancer Research, Oxford Branch in June 2016 as an Assistant Member, where my group has been developing technologies in epigenetics and applying them to elucidate epigenetic mechanisms in tumor biology and develop clinical applications in epigenetics. My lab developed a novel bisulfite-free and direct base-resolution sequencing of DNA methylation, called TAPS (TET-assisted pyridine borane sequencing), to replace bisulfite sequencing as the new standard in DNA epigenetic analysis.

I am interested in epigenetics not only because the versatile chemical groups found in epigenetic modifications offer a wonderland for a chemist to play with in an otherwise bland genome, but also because these epigenetic modifications are very important in biology. The two major epigenetic modifications in human DNA are 5-methylcytosine (5mC) and 5-hydroxymethylcytosine (5hmC), both derived from cytosine, which play crucial roles in a broad range of biological processes from gene regulation to normal development. More importantly, changes in the abundance and location of 5mC and 5hmC are associated with various diseases, and abnormal patterns of 5mC and 5hmC are hallmarks of cancer. Therefore, as one could imagine, being able to map 5mC and 5hmC is invaluable for both basic research and clinical applications. In particular, one of my key aims is to sequence 5mC and 5hmC in circulating cell-free DNA from the blood for non-invasive early cancer detection.

However, before we can do that, we need the right tools. The current gold standard for 5mC and 5hmC sequencing, bisulfite sequencing, has always been an unsatisfactory method due to its indirect detection and harsh chemical treatment, which damages most of the DNA in the samples. Recently, we developed TAPS, a mild bisulfite-free and base-resolution sequencing method that detects 5mC and 5hmC directly without affecting unmodified cytosines. TAPS could replace bisulfite sequencing as the new standard in DNA epigenetic analysis and could have wide applications in academic research and clinical diagnostics.

This webinar features a presentation from Chad Owen, an expert in virtual team facilitation, and insights from Ludwig Stanford’s Ravi Majeti and Ludwig Oxford’s Chunxiao Song. It includes an overview of the virtual convening landscape, as well as a live demonstration of the latest online tools and techniques to optimize team communication.