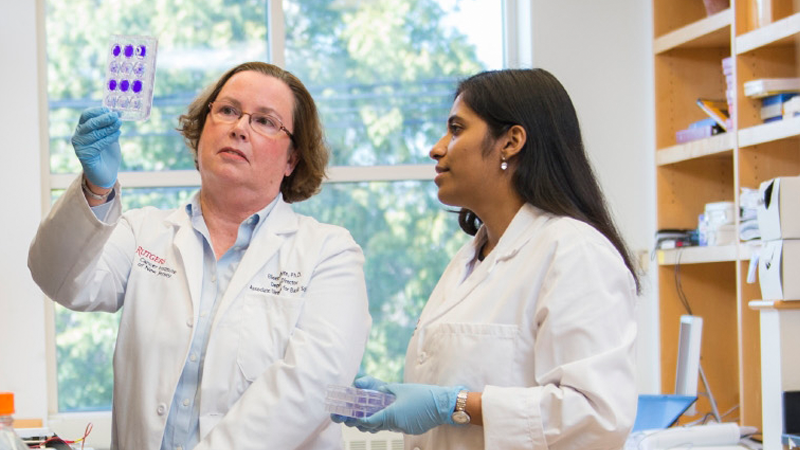 After obtaining a PhD at State University of New York, Stony Brook, I completed a Damon Runyon postdoctoral fellowship with Bruce Stillman at Cold Spring Harbor Laboratory, where I studied how genes encoded by tumor viruses cause cancer. As a Staff Investigator at Cold Spring Harbor Laboratory, I discovered that one of these viral oncogenes is an inhibitor of programmed cell death, or apoptosis, and that the protein it encodes is a viral homologue of the mammalian protein Bcl-2.

My work investigating the role of apoptosis in cancer continued after I joined Rutgers University in 1990 as an Assistant Professor, where I showed that the oncogene activation that deregulates cell growth can also activate apoptosis. These studies revealed roles for the p53 tumor suppressor in activating apoptosis and suppressing cancer, and for the Bcl-2-related anti-apoptotic proteins in promoting cancer. Our work also established that while some Bcl-2 family proteins inhibit apoptosis, other proapoptotic BH3-only members of the Bcl-2 protein family function as tumor suppressors, and that their activity is repressed in cancers. This contributed to the novel concept that resisting cell death was one of the ten hallmarks of cancer, and to the pharmaceutical industry developing Bcl-2 inhibitors for cancer therapy.

I am the Associate Director of the Ludwig Princeton Branch, the Deputy Director, Chief Scientific Officer, and Associate Director for Basic Research at the Rutgers Cancer Institute of New Jersey (RCINJ) and a Distinguished Professor of Molecular Biology and Biochemistry at Rutgers. My laboratory at the RCINJ investigates the role of apoptosis, autophagy—in which cells digest their own proteins and organelles to recycle vital nutrients—and metabolism in cancer.

My laboratory has established that tumor cells activate autophagy to tolerate metabolic stress. Autophagy allows tumor cells to recycle intracellular components to support growth and survival during periods of starvation, and prevents the toxic accumulation of damaged proteins and organelles during periods of stress. Autophagy is thus a survival mechanism that sustains metabolism and mitigates damage in cancer cells. We are now developing approaches to therapeutically block autophagy and thereby impair tumor metabolism to reduce the stress tolerance and survival of cancer cells during cancer therapy.

I serve on the Board of Scientific Advisors of the National Cancer Institute, on the Advisory Boards of several leading cancer centers and pharmaceutical companies, and have received numerous awards for my research.  These include a MERIT award from the National Cancer Institute, the Red Smith award from the Damon Runyon Cancer Research Foundation, a Howard Hughes Medical Institute Investigatorship and election to the American Association for Cancer Research Academy and the National Academy of Sciences.

A dialogue with Ludwig Princeton leaders

This webinar features a panel discussion with the new Ludwig Princeton leadership, Director Josh Rabinowitz, Associate Director Eileen White and Member Yibin Kang moderated by Scientific Director Chi Van Dang. Viewers will learn about ongoing research, opportunities for collaboration within the Ludwig community and what’s ahead for the Branch.