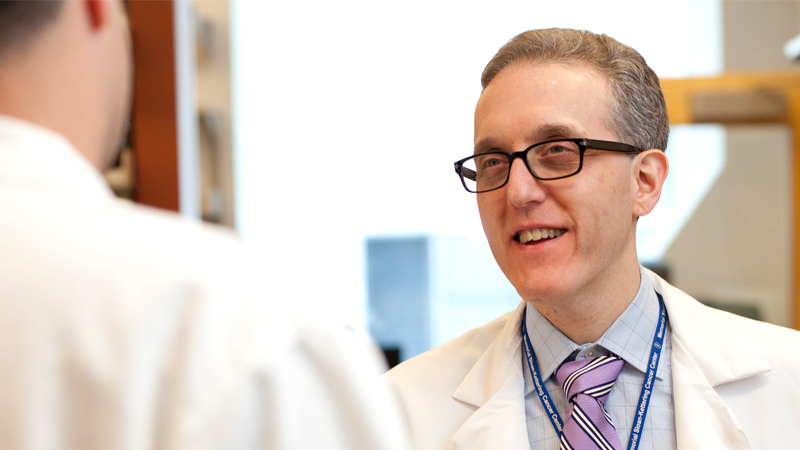 I received my undergraduate degree from Princeton University and my MD and PhD from New York University, where I also completed my residency. After my fellowship at Memorial Sloan Kettering Cancer Center (MSK), I remained on its faculty with an appointment in the Melanoma Immunotherapeutics Service. I am today Chief of the Melanoma and Immunotherapeutics Service and hold The Lloyd J. Old Chair in Clinical Investigation at MSK. I am also head of the Swim Across America-Ludwig Collaborative Laboratory; Associate Director of the Ludwig Center for Cancer Immunotherapy (LCCI); SU2C–ACS Lung Cancer Dream Team Co-leader and Director of the Parker Institute for Cancer Immunotherapy at MSK.

I am a clinician-scientist exploring immunotherapeutic approaches to the treatment of cancer in laboratory models and a principal investigator in numerous clinical trials. The translational research laboratory I lead investigates innovative strategies to modulate the immune response to cancer and explores the mechanistic basis of sensitivity and resistance to currently available immunotherapies. As a physician, I specialize in the treatment of melanoma

In 2011, I was named Director of the Cancer Vaccine Collaborative (CVC), a joint initiative between the Cancer Research Institute (CRI) and the Ludwig Institute for Cancer Research. The CVC, an international academic clinical trials network dedicated to developing immunotherapies for cancer, has conducted nearly 50 early-phase clinical trials of different therapeutic cancer vaccines involving more than 950 patients with melanoma, lung, ovarian, prostate, breast, and other cancers. In 2015, I was elected to the ASCO Board of Directors.

I have received several awards, including the Melanoma Research Foundation–Humanitarian Award in 2010 and the Melanoma International Foundation’s Doctor of the Year award in 2012, and was appointed Virginia and Daniel K. Ludwig Chair for Clinical Investigation in 2013. I have been recognized with the American Association for Cancer Research Richard and Hinda Rosenthal Memorial Award, the Giants of Cancer Care in Melanoma Award and have received the AICF Prize for Scientific excellence in Medicine. Most recently, I received the Melvin and Sylvia Griem Lectureship in Molecular and Cellular Oncology; the Alumni Achievement Award in Clinical and Translational Science from NYU, the Alfred Taubman Prize for Excellence in Translational Medical Research, the RCCS Monsey Medical Devotion Award, was named Society of Surgical Oncology (SSO) James Ewing Lecturer and am a Fellow of the American Society of Clinical Oncology.

The future of cancer research in the “new normal”

This panel discussion with Ludwig Harvard Co-director George Demetri, Ludwig Harvard Investigator Peter Sorger, Ludwig Lausanne Member Johanna Joyce and Ludwig MSK Member Jedd Wolchok, moderated by Rachel Reinhardt, Ludwig’s Senior Vice President for Communications, focuses on how to keep cancer research moving forward in these unprecedented times while ensuring the safety of our teams and patients. The panelists shared how they have pivoted in response to the COVID-19 pandemic, best practices for conducting cancer research in our current environment, and how they are returning, or plan to return, safely to the lab.