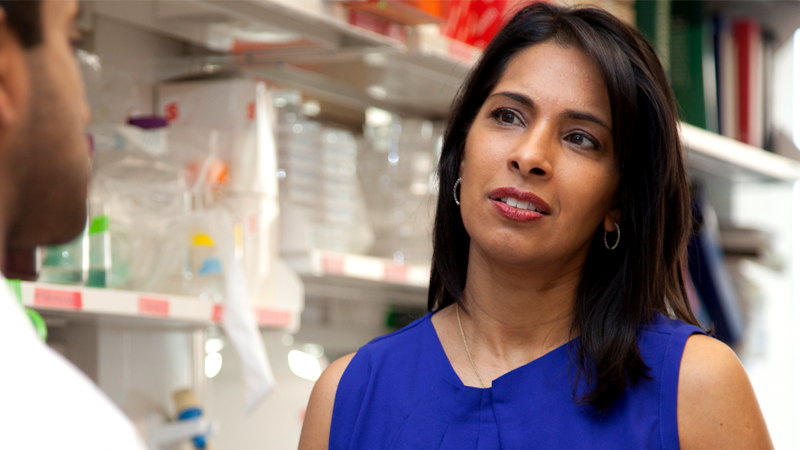 My laboratory is dedicated to leveraging miniaturization tools from the world of engineering to improve human health. Using micro and nanotechnologies, also called “tiny technologies,” the lab aims to interface living and synthetic systems to improve medical diagnostics as well as drug delivery, tissue regeneration, and disease modeling. In particular, my team is working to develop nanotechnology for the diagnosis and treatment of cancer and to improve therapies for liver disease. My multidisciplinary team has developed a broad range of impactful inventions, including various nanomaterials that can be used to detect, monitor, or treat cancer and other diseases. For example, nanosensors designed by my team can detect and profile tumors—even at very early stages—and can be analyzed via a simple urine test. This technology may also yield insights into a tumor’s response to certain therapies. Additionally, we have created human microlivers, which model human drug metabolism, liver disease, and interaction with pathogens.

I am currently the John J. and Dorothy Wilson Professor of Health Sciences and Technology and of Electrical Engineering and Computer Science at MIT. I earned my master’s degree in Mechanical Engineering from MIT and an MD/ PhD from the Harvard-MIT Health Sciences and Technology program, before conducting post-doctoral training at Massachusetts General Hospital. Prior to returning to MIT in 2005, I was on the faculty at the University of California, San Diego. I am an Investigator of the Howard Hughes Medical Institute and an elected member of the National Academy of Sciences, the National Academy of Engineering, the National Academy of Inventors and the American Academy of Arts & Sciences. I have received the 2015 Heinz Award for Technology, Economy + Employment, the 2014 Lemelson-MIT Prize, the David and Lucile Packard Fellowship—given to “the nation’s most promising young professors in science and engineering”—and the Brown Engineering Alumni Medal and was named a Merkin Fellow of the Broad Institute. In addition to my MIT appointments, I am an affiliated faculty member of the Harvard Stem Cell Institute, a member of the Broad Institute, an elected member of the Corporation of Brown University and a Scientific Advisory Board Member for the Chan Zuckerberg Biohub. In 2016, I became the inaugural scientific director of the Marble Center for Cancer Nanomedicine at the Koch Institute.